Welcome and Enjoy your visit !!!

" Quality Breeding Offering The Absolute Best In The Breed "

We are located in Québec, Canada

The exact origin of the Chinese Crested is unknown, but it believed to have evolved from African hairless dogs which were reduced in size.

The Crested is believed to have accompanied sailors on the high seas, hunting vermin during and in between times of plague; today the breed can still be found in port cities worldwide.

By the mid-19th century, Chinese crested began to appear in numerous European paintings and prints

Entries of the Chinese crested in American dog shows began in the late 1800's.

Surely the first lesson we learned when we got into dogs was that good sportsmanship is the glue that holds the fancy together. It embodies such principles as fair play, polite behavior and respect for our fellow competitors and the judges. Implicit in demonstrating sportsmanship is observance of the rules. And breed standards form part of our rules. So why are so many people trying to find loopholes in their standards to show dogs that have no business being in the ring?

As rules are meant to do, our standards tell us the make and shape of the breed representatives we should aspire to produce and present in the show ring. No club wants to put on a merely adequate show, no self-respecting judge would be satisfied doing a passable job of evaluating the day’s entries and no breeder or owner should want to exhibit a dog lacking fundamental type for its breed. Yet I hear more and more exhibitors defending a mediocre dog by insisting its faults are merely "undesirable” in the standard. "It’s not a DQ!” they will argue. Do we really need to make faults disqualifications before some people take them seriously and place a dog of average quality—though probably "finish-able” these days—in a pet home?

There used to be a huge difference between "show-able” and "show quality.” No one expected any bitch to whelp a litter brimming with show prospects. We were thrilled to have one or two promising puppies to run on.

It is no coincidence that our glut of midweek shows, with their smaller entries and easy majors, have also lowered expectations and cheapened many a win. I see incorrect outlines, generic movement, miss-marks and other significant faults displayed in dogs that would not have been shown 20 years ago. Today they defeat their litter mates that have even less to offer the breed. For some people, picking up that easy major is probably worth taking a Wednesday off work and entering half the kennel. So long as poor dogs with lots of holes don’t have a disqualifying fault, and everything is finish-able, a lot of mediocre breeders put championship titles on their mediocre dogs.

But to what end? Why would anyone want these dogs to reproduce and perpetuate their mediocrity for future generations? Because there are buyers even less knowledgeable than some breeders?

Years ago, strong entries forced us all to step up our game and show only our best. If that incentive no longer exists, it may fall to our judges to demonstrate by their placements that they refuse to settle for finish-able, second best, barely passable dogs. If we must live with small entries at smaller shows, let’s make them the highest-quality smaller shows we can, with worthy dogs being selected by well-informed, confident judges for meaningful wins.

From the September 2014 issue of Dogs in Review magazine. It has recently been the main topic of discussion among hairless dog breeders around the world that some Judges are perceived to have little understanding about the DNA behind the Hairless breeds - that which makes them unique in the dog world.
Recent scientific studies have discovered many new things about the genetics of hairless dogs that determines where and how much hair they have and the number of teeth. The Foxi3 gene has been identified as the one that controls the placement of hair and the number, shape and retention of teeth.

... It has been commented on by many experienced breeders across the world that judges are expecting Hairless dogs to have full dentition and not to have missing teeth. This is a misconception and shows a lack of understanding of the finer points of the hairless breeds.

It should always be remembered that the Hairless variety is NOT to be penalized for missing or irregular shaped teeth (as per the ANKC extended breed standard). The phenotype of the Hairless dogs is classified as Canine Ectodermal Dysplasia (CED.) The Foxi3 gene is the regulator of Ectodermal development which includes teeth. Due to this modification of the hair there MUST be an exception of a modification of the teeth

It has also been brought to the attention of breeders of Hairless dogs that some Lecturers, during judges training lectures, are giving their own opinions that Hairless dog breeders should have "fixed" the problem of lack of dentition by now. From the above information, it can be surmised that, due to genetics, it is not possible to have full dentition and hairless bodies.
Telling Hairless dog exhibitors that the dog is being dismissing because it has missing teeth is the same as dismissing a Rhodesian Ridgeback exhibitor because you do not like the backwards ridge on their dog's spine.

It is simple genetics, we cannot, no matter how hard we try, alter the genetics behind our dogs' lack of hair and teeth. The simple way to understand this is to look at other hairless animals such as Elephants, Pigs, and Hippos they all have some modification of body hair and teeth. Hairless dogs have specialized characteristics, please judge them accordingly.

The crested is not affected by many of the congenital diseases found in “toy breeds”. They are, however, prone to some of the conditions below. Crested have what is called a “primitive mouth”. This means that most of their teeth are pointy like their canines. Hairless varieties of the Crested can be prone to poor dentition. Poor dentition may include missing or crowded teeth and teeth prone to decay when not properly cared for. Most dogs of the Puff variety have few, if any, dental defects. Eyes are a concern within the breed, having at least two forms of “progressive retinal atrophy” (PRA) which can eventually lead to blindness. For one of these forms of PRA, there exists a genetic test, “prcd-PRA”. Since this test can only reveal the existence of affected or carrier status of this one form of PRA, breeders and owners of the breed should still have regular eye exams by veterinary ophthalmologists. The breed also suffers from another eye disease called “Keratoconjunctivitis sicca” (KCS) or “dry eye syndrome” (DES).

As with all other toy breeds, the Crested can be prone to “patellar luxation” (LCP). This inheritable condition is caused by shallow knee joints (stifles) and results in kneecaps that pop out of place. Its onset is often at a young age, and can cause temporary to permanent lameness based on the severity. Breeders should have their stock certified free of “patellar luxation”.

“Allergy”, “Epilepsy” and “Autoimmune” diseases have been observed in the breed. The severity of these ailments, which can lead to the premature death of the dog, means this is something breeders need to take seriously in order to avoid it becoming a problem for the breed. 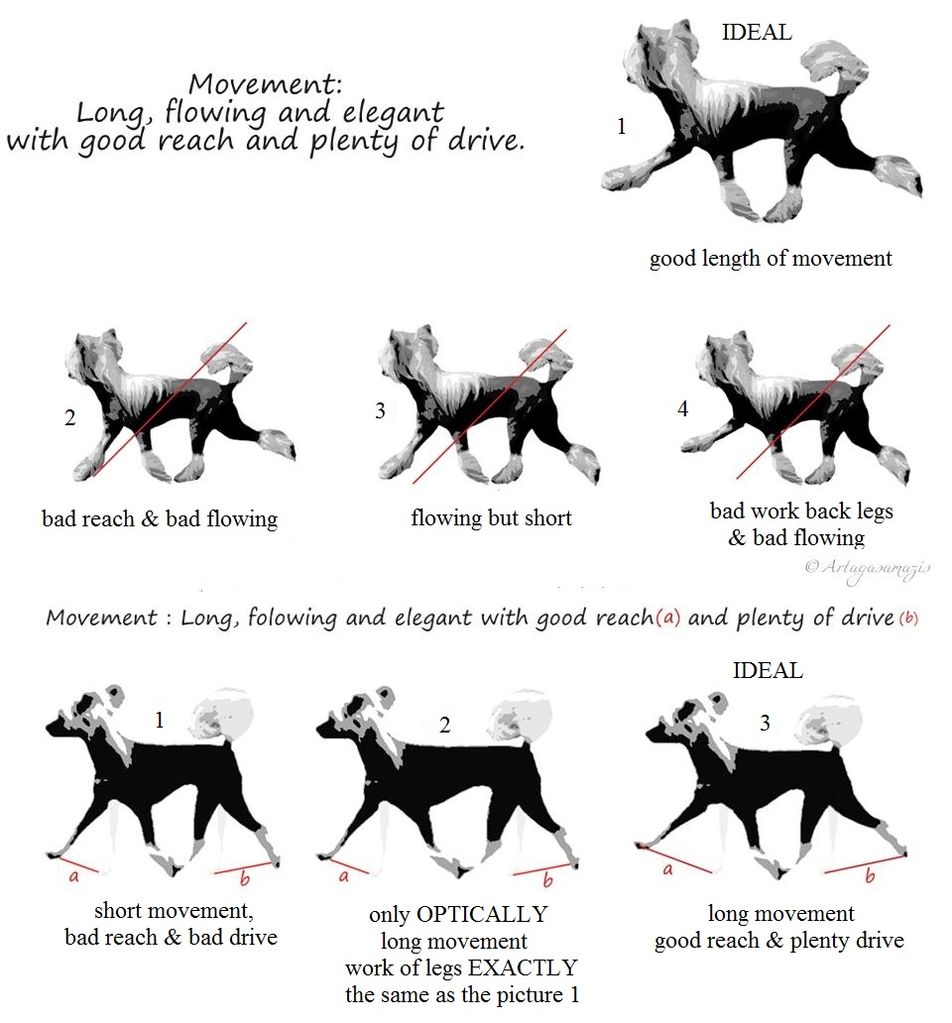 Thank you Aga Mazurek - Artagasamazis Kennel in Poland for the use of your art pictures.

Progressive Retinal Atrophy, Progressive Rod-Cone Degeneration (PRA-prcd) is inherited as an autosomal recessive disease. Degeneration of both rod and cone photoreceptor cells of the retina of PRA-prcd affected dogs usually occurs 3 to 5 years of age or later.  Affected dogs initially experience night blindness and loss of peripheral vision.  As the disease progresses, complete blindness will occur in time.  Different breeds and individual dogs may experience variation in the age and rate of the disease progression.

This mutation affects several breeds like the Chesapeake Bay Retriever, Chihuahua, Cocker Spaniel, Golden Retriever, Labrador Retriever, Poodle and Yorkshire Terrier.  To see if this test is available for your breed, use the Order Canine Tests by Breed tool to see a complete list of DNA tests.

It is important to note, although carriers will not show clinical signs of the disease, if used for breeding, they will likely pass on the mutation 50% of the time, therefore a carrier to carrier mating will likely result in producing affected pups in about 25% of the offspring.

Results are based upon the specific prcd c.5G>A mutation. There are multiple types of PRA caused by other gene mutations.  Clear results for PRA-prcd only pertain to the prcd c.5G>A mutation tested.  It will not detect if a dog has any other form of Progressive Retinal Atrophy.

Please  Note: Crestyle® and AshtagBengal® is by law a Protected and Registered **Trade Made Mark**
Do not use the name Crestyle ® or AshTag ® without license. All Information in this website is copyright to Crestyle or AshtagBengal and is intended only to "view" our dogs and cats.  Reproduction of content or use of graphics or photos without prior written permission, is strictly prohibited.  Forwarding, copying any of our pictures and disclosure or any other distribution of them is strictly prohibited. According to the DMCA anyone found to be in violation of copyright laws will be prosecuted in a court of law.  We will be holding them responsible and will be seeking extreme damages for such violations.