Welcome and Enjoy your visit !!!

" Quality Breeding Offering The Absolute Best In The Breed "

We are located in Québec, Canada

When studying a pedigree, remember it is a shorthand document for breeders. In breeding if parents contribute 50% of the genes and grandparents 25% and great grandparents only 12%, anything past 3rd generations isn't contributing anything. That is unless the a particular dog appears several times within the pedigree (meaning close linebreeding) 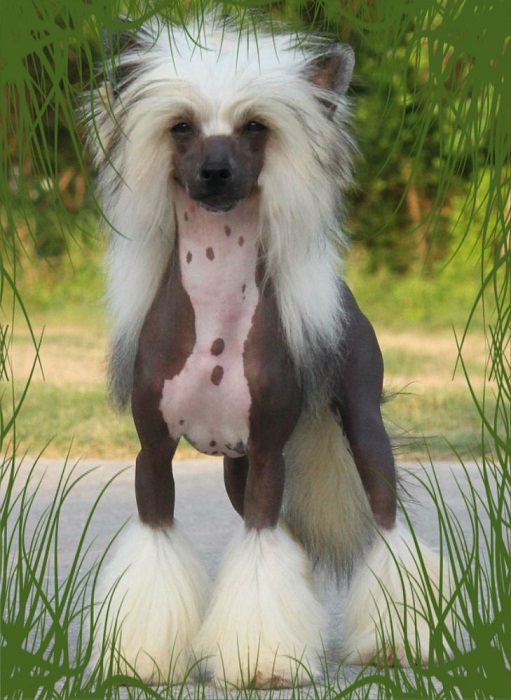 Mimi is of my grand-child hairless female

Surely the first lesson we learned when we got into dogs was that good sportsmanship is the glue that holds the fancy together. It embodies such principles as fair play, polite behavior and respect for our fellow competitors and the judges. Implicit in demonstrating sportsmanship is observance of the rules. And breed standards form part of our rules. So why are so many people trying to find loopholes in their standards to show dogs that have no business being in the ring?

As rules are meant to do, our standards tell us the make and shape of the breed representatives we should aspire to produce and present in the show ring. No club wants to put on a merely adequate show, no self-respecting judge would be satisfied doing a passable job of evaluating the day’s entries and no breeder or owner should want to exhibit a dog lacking fundamental type for its breed. Yet I hear more and more exhibitors defending a mediocre dog by insisting its faults are merely "undesirable” in the standard. "It’s not a DQ!” they will argue. Do we really need to make faults disqualifications before some people take them seriously and place a dog of average quality—though probably "finish-able” these days—in a pet home?

There used to be a huge difference between "show-able” and "show quality.” No one expected any bitch to whelp a litter brimming with show prospects. We were thrilled to have one or two promising puppies to run on.

It is no coincidence that our glut of midweek shows, with their smaller entries and easy majors, have also lowered expectations and cheapened many a win. I see incorrect outlines, generic movement, miss-marks and other significant faults displayed in dogs that would not have been shown 20 years ago. Today they defeat their litter mates that have even less to offer the breed. For some people, picking up that easy major is probably worth taking a Wednesday off work and entering half the kennel. So long as poor dogs with lots of holes don’t have a disqualifying fault, and everything is finish-able, a lot of mediocre breeders put championship titles on their mediocre dogs.

But to what end? Why would anyone want these dogs to reproduce and perpetuate their mediocrity for future generations? Because there are buyers even less knowledgeable than some breeders?

Years ago, strong entries forced us all to step up our game and show only our best. If that incentive no longer exists, it may fall to our judges to demonstrate by their placements that they refuse to settle for finish-able, second best, barely passable dogs. If we must live with small entries at smaller shows, let’s make them the highest-quality smaller shows we can, with worthy dogs being selected by well-informed, confident judges for meaningful wins.

From the September 2014 issue of Dogs in Review magazine.

Please  Note: Crestyle® and AshtagBengal® is by law a Protected and Registered **Trade Made Mark**
Do not use the name Crestyle ® or AshTag ® without license. All Information in this website is copyright to Crestyle or AshtagBengal and is intended only to "view" our dogs and cats.  Reproduction of content or use of graphics or photos without prior written permission, is strictly prohibited.  Forwarding, copying any of our pictures and disclosure or any other distribution of them is strictly prohibited. According to the DMCA anyone found to be in violation of copyright laws will be prosecuted in a court of law.  We will be holding them responsible and will be seeking extreme damages for such violations.